We did not suspect a thing the first time we handed each dog a hunk of stale baguette. Nor did anything seem odd when they  trotted off to make slobbery crumbs on the rug.


But Wally’s bread was soon gone, and Little Guy’s was not.

We’d previously learned the meaning of, “The bone of contention,” when the two dogs would go to war over any randomly selected bone out of their bone collection. But Wally wasn't interested in Little Guy’s bread and neither were the human members of the family. 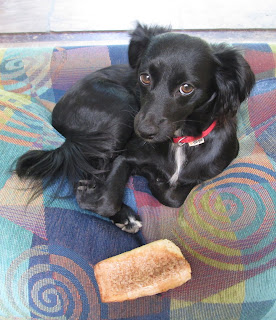 There was no convincing Little Guy of our indifference, however.

He went on high alert, deeply suspicious of our intentions. Fiercely defending his bread from imaginary threats, he carried it with him indoors and out.

He slept beside it.

But this love affair seemed to bring him more stress than joy. He dared not leave the grubby, tooth marked, crumbling, object of his devotion unattended.

His hyper-vigilance soon made movement through his day nearly impossible. How could he bark at the mailman with his bread? What was he to do if cookies were offered? Or a ball thrown? How could he close both eyes to sleep?

By day four, dog and bread were ragged, and just as he'd feared we would, we seize and disappear the remains of Little Guy's beloved. 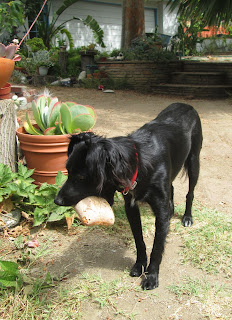 Since that first baguette, others have taken its place; whole wheat, sour-dough, classic French. Little Guy’s passion for each remains undiminished.

This makes us wonder if we are doing him a favor or cursing him with each new offering.  In fact, as I write this, his foot rests protectively across his latest.

A dog and his stale bread, a fraught affair, a beautiful thing. 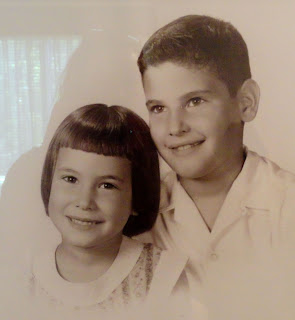 As you may know, my brother Bear and I both write for the LA Times from time to time.
Now for the first time ever, all our parents' children (there are only two of us) have articles appearing on the same (op-ed) page at the same time!
So, this isn't a blog, exactly. But how could I not share something so adorably brotherly / sisterly?

Here's the link to mine about my childhood friend Barbie having a rough year, financially.