Others in my racket were heading to Vegas for the ALA to advance their careers and bask in the kid-lit glow. But serious wordsmith that I am, I planned a solo writer’s retreat instead. Just me, Wally-the-dog, and the lap-top I borrowed from my daughter.

Deb & Avi had offered me their new house on their 500 tree orange grove near the little town of Fillmore. Wally and I drove up through farm land and mountains to get the key ahead of time. 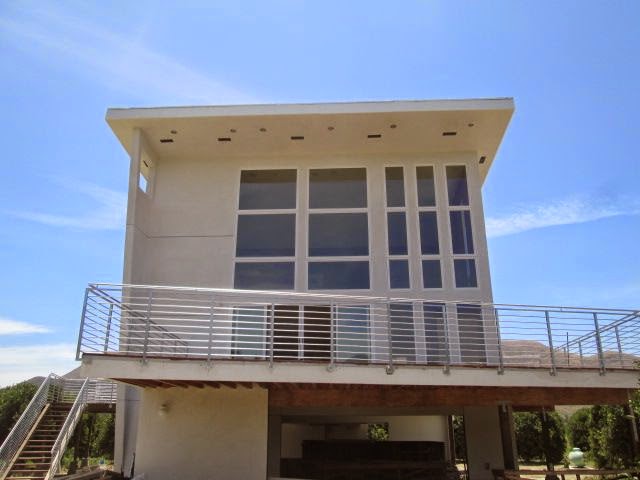 Upon our arrival, Wally lifted his leg and piddled on the brand new floor. He was promptly uninvited to join me on my retreat. Adjust image: Erase Wally from my side. Done.

A few days later I was off! The drive was lovely. I stopped at a picturesque fruit stand and loaded up enough strawberries and mangoes to last forever. 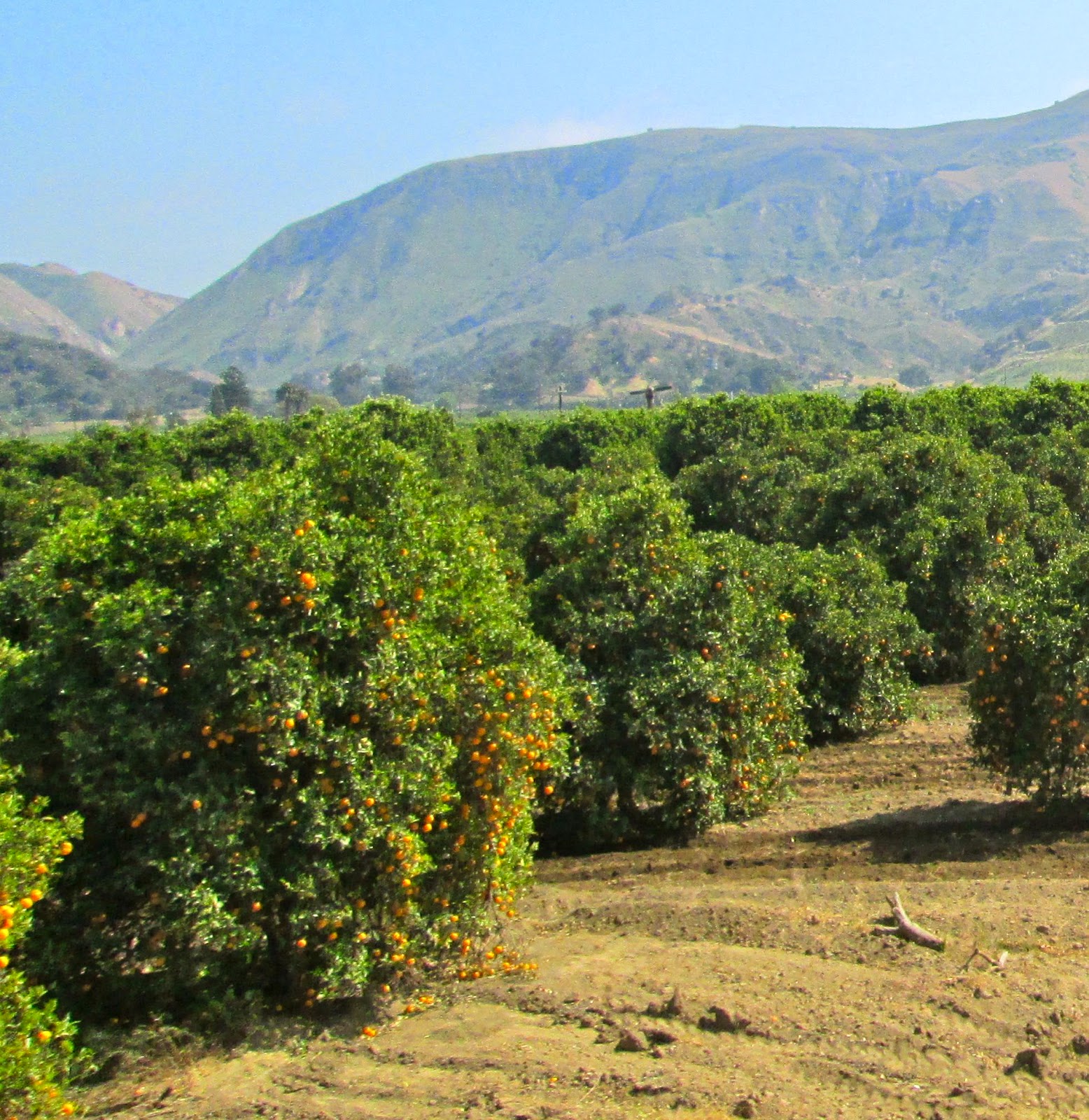 It was still morning when I arrived in paradise. There was a perfect breeze with birdsong and an occasional horse neigh to really put the smack of country on it. The view was  orange trees, windmills, distant mountains, and sky.

I had never been so wonderfully alone.

I took off my bra, set up the computer and sat down to write. 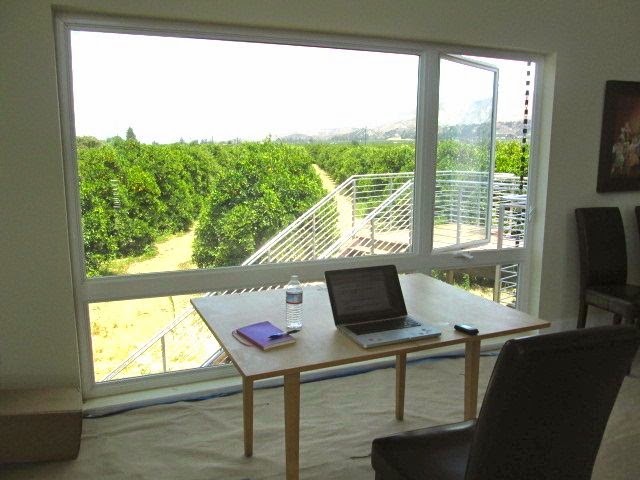 This has been a problematic novel from the start, but then, they all are. I was liking it on the re-read. Luckily, I have the same taste as myself and often find my writing compelling. It helps, too that I have a wonky memory so that after these cupla months away from it the goings-on of the plot were taking me by surprise. 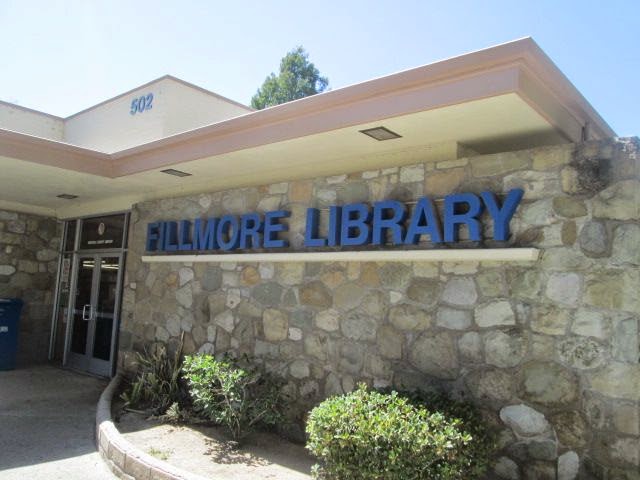 There was no wi-fi at the house and I was not ready to go cold turkey, so late afternoon I put the bra back on and went into town to find the Fillmore Library. They had one copy of The Girls, sparing us both a great deal of embarrassment. I signed it and checked my e-mail.

On my way back down the main street, many stores called to me, including, “Little Shop of Hoarders.” But I snubbed them and returned to the house to write. 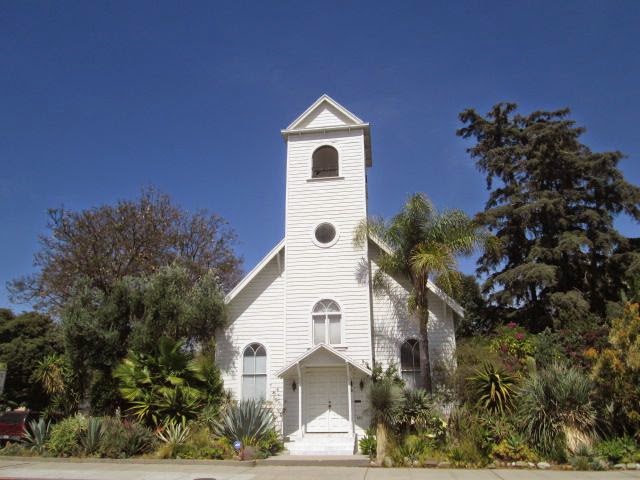 It was around then that I realized I’d forgotten the bag with my meds: hormones and anti-depressents, without which I would either be unable to drag myself out of Deb & Avi’s loft bed, or I’d run amok in sweet little Fillmore with a machete.

Daughter to the rescue, (an hour drive each way) with all three dogs and a bag of fries. She called later to report that two of the three dogs barfed in the car on the way home. One barfed twice so it was as if all three had. 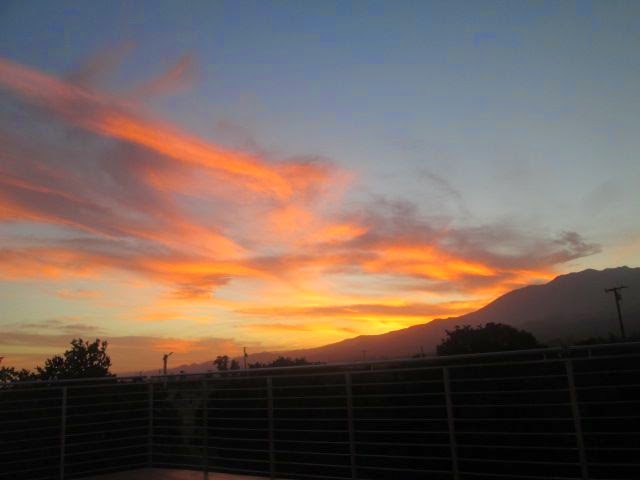 Alone again. On the deck watching the bats shuck and jive. Then a pink, swirly sunset followed by stars galore. Ah!


Awakened early by what I thought was hammering. Discovered a crazed brown bird hurling himself head first at the window. The amount of bird turd on the deck told me that this was not his first morning at it.


A day of coffee, strawberries, weeding, watering, and a bit of writing, warming up, easing into it to really kick-ass tomorrow.  But first, back on the deck ready for the sunset / star show. 8:pm. Cue bats. 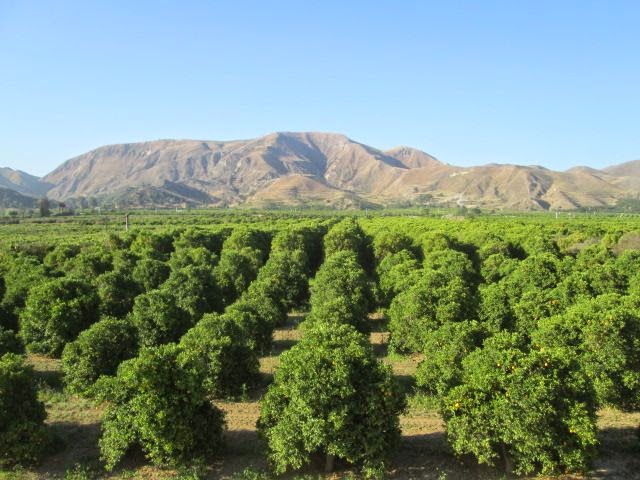 Then a man appeared out of the orange trees below me!


The man walked up the steps, so I leaned over the rail and calmly repeated, “MR. AVI IS NOT HERE!!”

But the guy opened the door and came right in! He mumbled something about installing a water heater and needing to turn the water off at 7:am tomorrow. He asked me if I was staying there over night.

He stood in the living room, near an odd blue machine-thing that I’d noticed but ignored. Maybe it was a water heater. Maybe it was a surface to air missile. In any case I was creeped out.
When he finally left, my whole aloneness had been punctured. So, I shoved my stuff in my bag and this little piggy ran wee wee wee all the way home.

Is it too late to make it to Las Vegas?
xo Amy

AmyKossBlogThang: Thinking on Things: Warning: this is another no-laffs-blog. Any second now I'll be back to normal. But not yet. xo amy When we’re little we think our ...
Posted by Amy Goldman Koss at 2:49 PM

Warning: this is another no-laffs-blog. Any second now I'll be back to normal. But not yet. xo amy

When we’re little we think our parents know everything. For a while during adolescence we may think they’re dumb as toads, but we re-realize our parents' brilliance when we have kids of our own.

But the story doesn't end there.

Next comes the part where Mom & Dad get on our nerves again, just as badly as when we were thirteen.


Now, however, we’re middle aged and not allowed to roll our eyes when they repeat questions without registering the answer. We can't storm out of the room and slam the door, or crank the music up to drown them out when they tell the same embarrassing story about us on loop.

This time around, we don't get to pity ourselves.
We have to act mature and compassionate.
In fact, we need to step in and take over in big and little humiliating ways that make both generations cringe.

But the story doesn't end there either.

Our ultimate hope is not for our competent children to ease our transition.
The report from many deathbed vigils is that at the very end we are back where we started, calling for Mom.

We were moving my parents into assisted living, so the destruction done by the mere passage of time, was on my mind. I was still stunned and reeling from the changes in my parents, just in the couple of months since I'd seen them last. It was heartbreaking to see them like that, and terrifying to imagine going that way myself.

That can happen? Was it time to plan my preemptive suicide?

Meanwhile, our goal was to create a mini-version of my parent's house as quickly as possible so they'd sleep in a semi-familiar setting that first night, diminishing the confusion. Among the things being moved was a picture of me taken when I was in high school. It had hung in my parent's bedroom forever, so it would hang again. 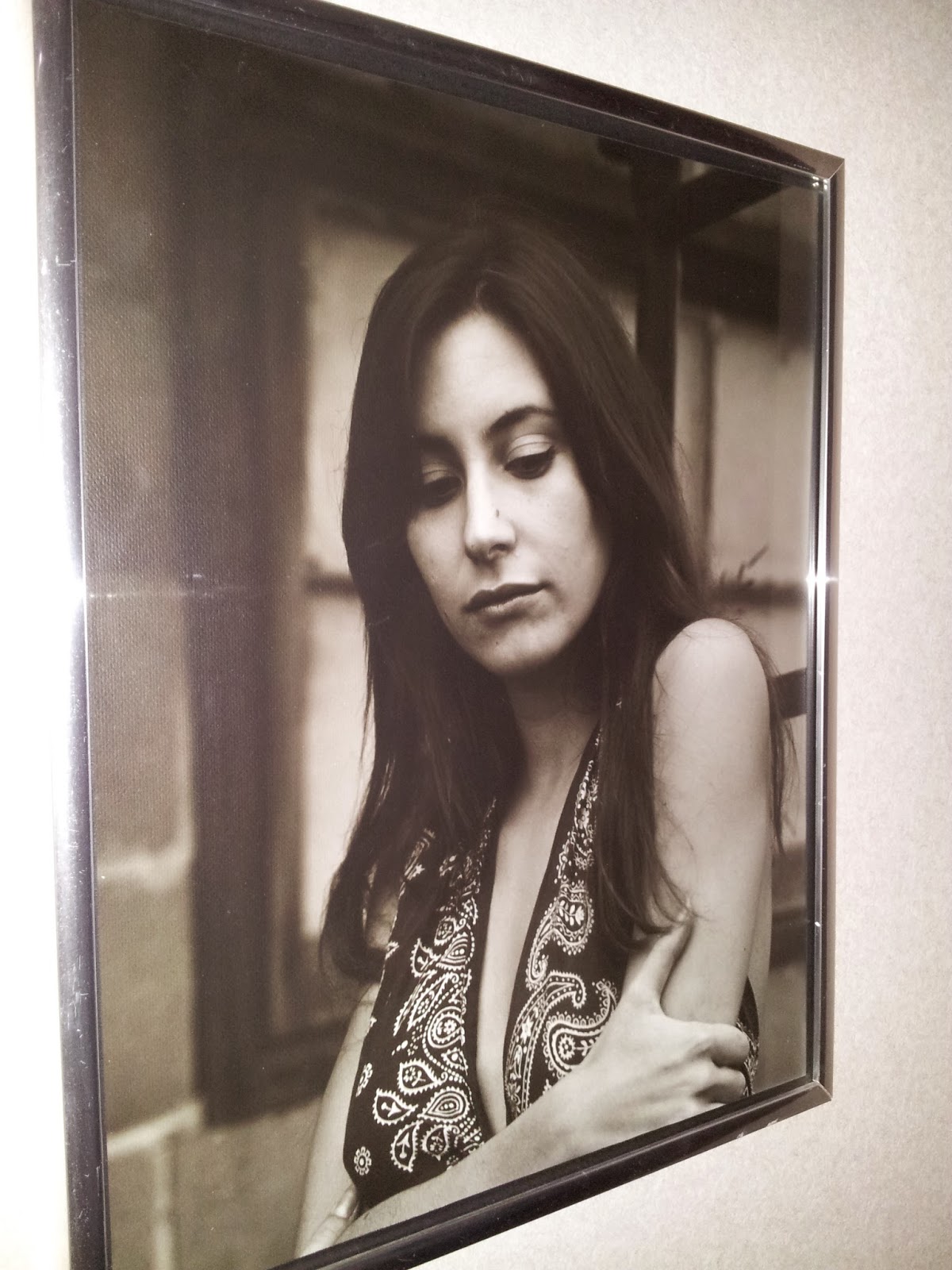 The movers were four beefy blond boys in their twenties who chatted to each other about their gyms and work-out regimes while lugging boxes and dressers.

My brother was in the new living room. I was around the corner unpacking the bedroom when I heard one of the movers say, "Whoa!" and make  hubba-hubba noises.

Another one of them added his male appreciation grunts, and asked my brother, "Who's this?"

"It's her," my brother answered, indicating me.

A stunned silence fell. The silence of young brains confronting  the cruel ravages of time. The awkward, lengthening, silence of troubled minds asking: "That can happen?" 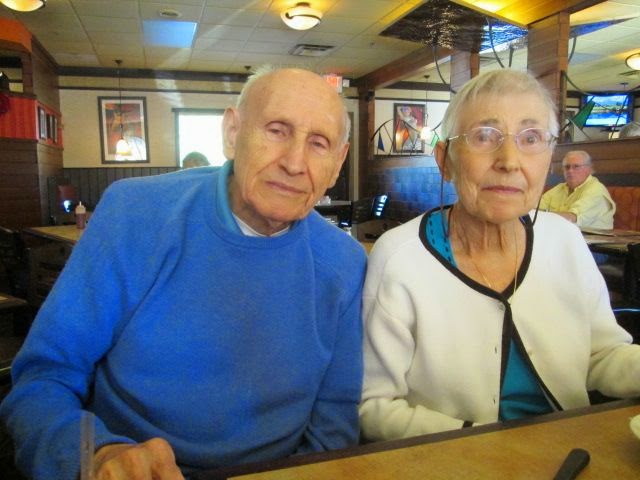 Long ago I lived in Grand Ledge Michigan with a bunch of other sweaty, hopeful, unpaid, summer stock apprentices, and a dead rat in the pipes that stunk up the flat when any fool turned on the faucet.

The moment I remember most about that summer came after hearing a shriek of brakes and maybe a thud. Out the window, on the black street, I saw a very white dog in a pool of very red blood.

At the sight of me running toward him, he lifted his head and wagged his tail, splashing it in the blood. He believed I was coming to help him, to make it all better.

This image repeats on me like acid-reflux: the trust in his wag, the hopelessness and powerlessness of reality.

I'm back home, in bed in California now, having left my parents waving bravely from the door of their strange new apartment in assisted living in Michigan.