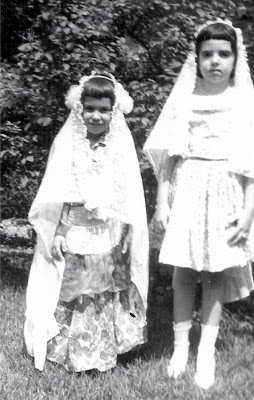 What I remember about childhood Halloweens in Detroit:
1. We (and by 'we' I mean my best friend Birdy and I) could run around the neighborhood at night, in the dark.
And
2. We could wear makeup and jewelry and long skirts and be gorgeous Gypsies. Or we wore lovely flowing veils and were beautiful brides.
Here we are in all our radiant splendor. I assure you, the way we appear to the jaded adult eye had no bearing on the way we felt. We knew we were beautiful, graceful, lovely beyond compare, in our kitchen curtains.
(I am the shorter one, Roberta is on the Right)
Then there were the lost years, where Gypsies and brides turned to witches and real brides. 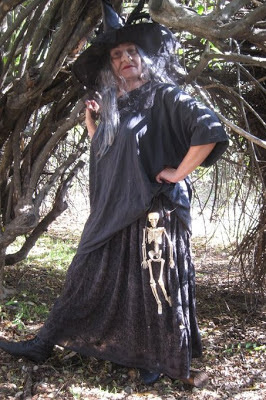 Fast forward to Los Angeles. Upstairs apartment, funky neighborhood. I don my witches’ hat and nose, paint the face a sickly green, add lines and creases. I wear the trailing black slip and boots. I fill a giant bowl with candy.
And there I sit, all witched up and no one to scare. Not one kid comes to our door. Trick-or-treaters: zero. I cried.
Move to a different part of town. Oh boy! Kiddies to scare and scar! Oh cackle oh joy! Three little girls come as princesses, lipstick, blue eyelids, lots of jewelry.... and BAM! I’m in tears again! Biological alarm clock blares without warning: MUST HAVE DAUGHTER TO COSTUME IMMEDIATELY!!!
I obey. Children come, they grow, they go.
Now: Time again to dress. I take my lovely, latex nose out in preparation. Shake out the hat and slip and boots. Each year it requires less time and effort to achieve the same warty, wrinkled effect. The candy is bought, the neighborhood ripe with kids. No tears this year. I'm old and safe. Happy Halloween my friends!
Boo!  Amy

Once upon a time, in an acting class at Lansing Community College a boy named Treadwell and I were assigned to a scene study. I don’t know what the play was, or what set us off, but for some cosmic or chemical reason, we couldn’t look at each other without busting into giggles. Even when we averted our eyes, the sound of one of us trying to breathe, or utter a line, reduced us both to sweaty, face-cramping, pants-peeing hysterics.
Not a bad way for a friendship to begin.
The details are dim for a while after that. I know that when we were unpaid slave/apprentices at summer stock we got a gig house/pet sitting for some poor overly trusting couple. I remember finding and hooting over their sex toys. And although we'd promised to leave their huge dogs outside at all times, we ended up letting them in to have a pee party on the carpet and eat the couch and shred the curtains.
Eventually I moved away and got married a couple of times. Treadwell moved to New York and fell in love with a Swede or Dane or something named Dougas. I never felt totally comfortable with the absence of an L in Dougas’s name. And when he carted my pal Treadwell across the world to live in Germany, I felt my suspicions of his L-less-ness were utterly justified.
For a few years, like 12 or 20, Treadwell came to visit once a year or so.  His english got worse as his German improved. He started putting his words in the wrong order. By then he and Dougas had become hot-shot Psycho-Drama-Therapists holding workshops all over Europe and Scandinavia. Treadwell was too busy to come to California, and I had too many babies and other excuses to go to Germany, where everything they said sounded like, "Put the Jews in the oven!" to me.
All we had was the telephone and e-mail and we both got lazier  about even using those. Dougas died, Treadwell got sick. Months would pass. Many months.
But: I SAW TREADWELL TODAY FOR THE FIRST TIME IN YEARS!!!!!!
Not because either of us got off our asses, but thanks to the grand, glorious, miraculous, generous, brilliant invention of SKYPE!
It wasn't just his disembodied voice on the phone. But his beautiful face! In motion! With actual Treadwell-esque expressions! His cigarette smoke curling in real time! He held up his new dog for me to meet and I showed him mine. He showed me his most recent paintings, and I showed him I still had the one he painted for me ages ago. I saw his new mustache and the way he plays with it. And there was the tattoo I’d forgotten about on his wrist. His smile. His blue blue eyes. And, of course, his incomparable Treadwell laugh.
So, whatever nasty things I may have said against technology in the past, I take it ALL back.
xo Amy