News of the Newtown massacre came in staggered, horrific bits. We discussed the incoming details as if some possible arrangement of these facts would eventually make sense. But there is no sense to be made, and after the initial tears and rants we felt no better. 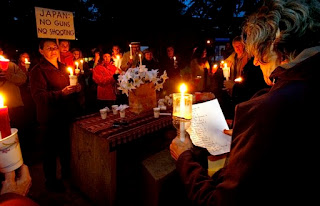 Someone posted a link on facebook that said you could just type in your zip code to find where the closest Candlelight Vigil was being held. I hadn't been looking for such a thing but it turned out there were three or four within 30 miles of me.

The website also offered the option of hosting your own candlelight vigil by simply clicking a box, and setting a place. Much to my own surprise, I did just that, and named our park as the venue.

The vigils nationwide, were to be held from 5 to 6:PM Saturday night. So be it.

By the time I’d sent emails to a few neighbors, nine people had signed up on the moveon.org event page, to attend my vigil in the park. The number quickly climbed to 14. I didn’t recognize any of the names on the list. 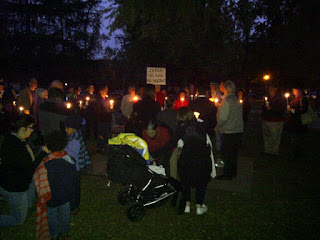 It seemed unreal that community could be created like that, by clicking boxes on an online form, but when I next checked, the number of attendees on the event page had leaped to 31.

I grabbed a table cloth for the picnic table, candles, matches, and the fake peace lilies my son and his girlfriend and I had bought, and headed to the park, not knowing what to expect. 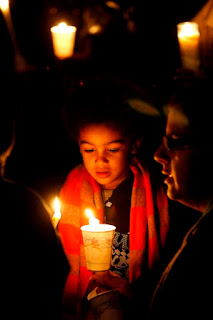 It had been ten years since my first and last vigil. That  was for my husband’s co-corkers Euna and Laura when they were being held in N Korea. That one had loads of press and fancy, high profile speakers. This one, as far as I knew, would have me, and if they showed up in time, my family, my dogs, and 31 strangers who might expect me to have a plan.

A couple of young boys were shooting hoops at the park. A few toddlers and their parents or grandparents were in the play area. That was enough to choke me up.

I’d raised my kids at this park.

I spread the table cloth, and placed the peace lilies in a grocery bag, hoping that was enough to identify our table, since I’d failed to make signs of any sort. I used my car key to poke holes in the bottom of paper cups, and started jamming the candles into them. The cups were supposed to catch the dripping wax.

The first woman approached, tentatively across the tidy park lawn, with a bag of candles. There was that moment where it seemed presumptuous of me to act as host since I was no closer to the deceased or the bereaved than any other stranger was. It felt unseemly, as if I was forcing myself into the center of someone else’s private heartache. But awkward or not, that too, was irrelevant.

More women came, alone and in pairs. We all shook hands, exchanged first names, messed around with the candles. The talk was of sleeplessness. We'd all had trouble the night before, kept awake by thoughts of those poor children, of their parents, those teachers, those moments.

We didn’t know how many candles and cups we’d need, but we kept at it, as women do, preparing, setting up. More people appeared from different directions as twilight took over. Men, women, old, young, couples, children, twin babies in a double stroller. A few dogs. There were about 40 people by 5:00, when we lit the candles. The sun disappeared entirely as a woman read the long, sad, list of the victims names and ages. 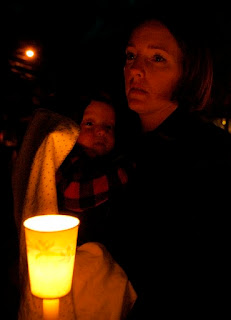 A man spoke next, at length, about gun control, until I (rudely, my husband says) cut him off to ask if anyone else wanted to speak. People did, mostly about gun control. There was anger regarding the easy access to firearms versus the difficult access to reasonable treatment options for mental illness. A photographer from the local paper shot pictures.

People continued to arrive. More candles were lit and passed around. At some point my husband counted at least 70 people there. The newspaper reported 60.

A former member of the state legislature spoke about gun laws, as did a member of city council. People discussed protesting the local gun show. I stopped listening to look around at the mix of strangers, brought together via the Internet, to meet this one time, in candle light.

Eventually I thanked everyone for coming together, and expressed my hope that we'd never have another reason like this to do so again. We had a moment of silence and blew out our candles. Some people broke into smaller groups to talk, others wandered off into the darkness. I rolled up the table cloth and threw away the ripped, waxy cups. My family left and when the crowd had thinned to almost nothing, I followed them home.

Had anything been accomplished? Did any one feel any less sad, any less alone? We do what we can, but it is so hard to see the point of things at times like this.

Posted by Amy Goldman Koss at 3:07 AM

"How many ages hence/ Shall this our lofty scene be acted o'er,/ In states unborn, and accents yet unknown!" - Julius Caesar (3.1.111)

Thank you for doing this.