Dears, I HATE to miss it, but I'm outta town this year during WBN. So, am posting a rerun of last years WBN blog in case you're interested.
Lots of Love, Amy 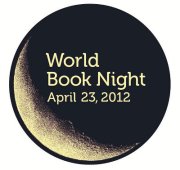 Here's all I knew about World Book Night, when I applied on-line to be a book giver --  I'd be volunteering to hand out 20 copies of one of 30 titles especially printed for this event, authors foregoing royalty, publishers foregoing profits, everyone just spreading a love of reading to people who don’t normally have easy access to books. The idea was to hand out a half a million free books, in 6,000 towns and cities across the country, all on the same day.

On the application I said I’d leave the books on park benches and bus stops & I chose to pick my books up from Vroman’s, an independent book store where I teach. Picking the book was a little harder, it was a great list.

I decided not to do a teen book, because that was too close to my real life. So I chose Tim O’Brian’s brilliant Vietnam novel The Things They Carried, because I could remember exactly where I was when I’d read and loved it many years ago, and for a compulsive reader like myself, that’s saying something.

I’d asked a few friends if they wanted to give away books with me. Many said they’d love to, but it ultimately whittled down to one pal saying she'd try to join me for an hour or so in the late afternoon, and my husband agreeing to go with me at night.

I pictured one of us driving the get-away car, trolling the streets, slowing by a park bench and idling while the other one pops out, places the book at a tempting angle, and we zoom away.

That brings us to World Book night - day.  It was rainy as I drove to Pasadena to pick up my box of books. I figured I’d stop on the way back and get plastic bags to wrap each book in.  In my minds eye, however, they looked a whole lot less tempting in bags on soggy benches.

At Vroman’s will call, I was given a small black pin with white letters that said, World Book Night, Book Giver, April 23, a xeroxed thanks and congratulations, a sheet of hints and reminders of no significance, and, ta-da! My box of books!

I tore it open the second I got back to the car. Then pulled out of the parking lot, suddenly so giddy, that I rolled down the window and offered a book to the first person I saw.

“Want a free book?” I called out through the drizzle to a guy waiting at the light. His eyes darted for a second, but then he shrugged, “Sure,” and stepped closer to take the copy I was waggling out the window.

I pulled away, thrilled with my first triumph, until I realized he'd been wearing a snazzy bright green jogging kind of thing and was probably a rich Cal Tech student with more books in his library than I had in mine.

I had to be more selective. But really, my adrenalin was pumping and I suddenly knew how Santa must feel with his big bag of presents.

So, too excited to wait, never mind my plans to take people with me later, I immediately got on the freeway and headed straight for Skid Row.

As I drove, ok, sped, I decided two things. 1.) I would pace myself and only give out 10 of my remaining 19 books down town, saving eight for my originally planned park benches and bus stops.  And 2.) There’d be no more impulsive giving to people who might possibly be rich.

But as I got off the freeway at Hill I had to stop myself from rolling down the window at every light and hysterically hurling books at whoever passed by. I did let myself give one out at a light in China Town, but then I took myself firmly in hand and sternly reminded myself to face the grim reality of already being down two books.

I found a parking meter a block and a half before the mission on 6th. I only had enough change for 15 minutes, so I hastily stuffed eight books in my purse and two under my arm, and hit the street.

A few dampish folk, sitting beside their blue-tarp tents said, “no thanks,” or “I’ll get it next time,” but others accepted my books with pleasure. Some looked a teeny bit suspicious, one asked if the book was of a “biblical nature.” But in no time my ten books were gone.  I hadn’t even made it all the way to the mission, where a crowd of rain-soaked people were waiting outside.

I  returned to my car and dealt a few more books out to people passing by. One woman pulled the book she was reading out of her cart to show me that she was almost done with it. Another told me he didn’t want a Vietnam story, “Vietnam was boring.”

Good! I thought. I'm giving way too many out down here anyway. But trying not to give any more away, was like trying to save the last few cookies for later. Ha! The next guy who passed wanted one.  And then, there were only two left.

I’d wondered earlier if it would be considered stealing for me to keep one commemorative copy, since this was a special one time printing, and the first World Book Night in the States, and all... But fate answered for me, as the last book left my hand.

My parking meter hadn’t even run out, and all I had left was my Book Giver pin, which I hadn’t even put on yet, and an empty cardboard box that I’d bequeath to my Guinea pig as a new hidey-hole when I got home. My World Book Night -- over by noon!

xo
amy
P.S The WBN facebook page is full of great stories.
https://www.facebook.com/worldbooknightusa
Posted by Amy Goldman Koss at 5:55 AM