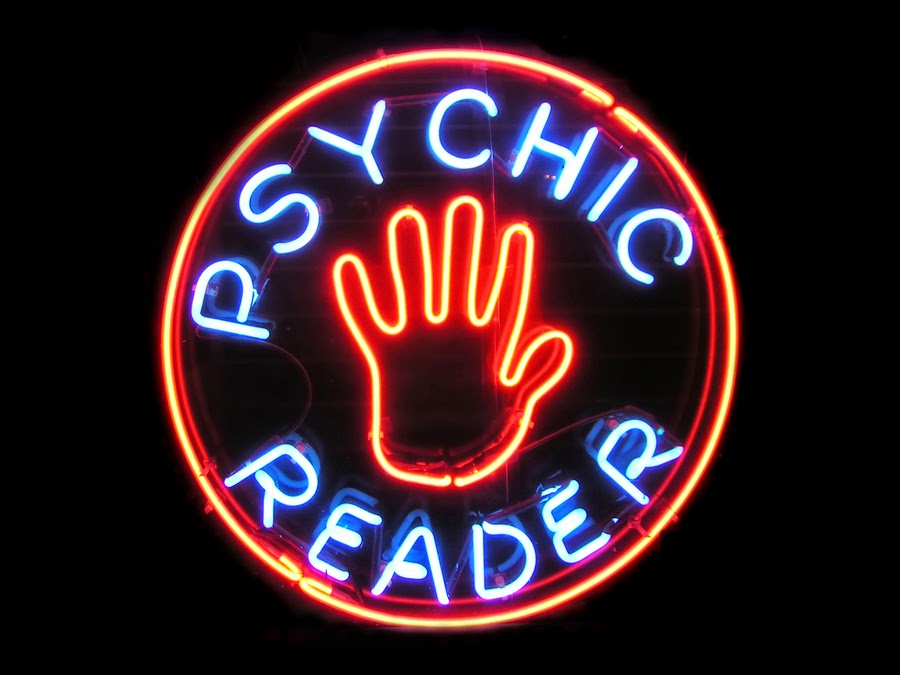 I’ve always wondered about those fortune teller houses decorated with moons and stars. But you can’t pay money just to satisfy curiosity if you're #1. A non-believer (although admittedly one who blows dandelions to make wishes) or #2. Cheap.

So I pitched an article to the Times offering to go to a bunch of psychics around town and compare their stories, see if they come up with one common prediction, one more-than-coincidental bit of truthiness. I promised it would make a good new years piece.

They agreed, although with less than their usual enthusiasm.

So, after a few chicken-outs, I pulled over at a place near me in Glendale and marched right up the painted stairs, rang the bell and asked the woman who answered, if I could have a reading. When she unlocked the iron security door I introduced myself and extended my hand. But she said she never shakes hands.

I figured she meant that her hands were too packed with powerful sensitive ju-ju. But then she said, “You never know who has been in Africa.” 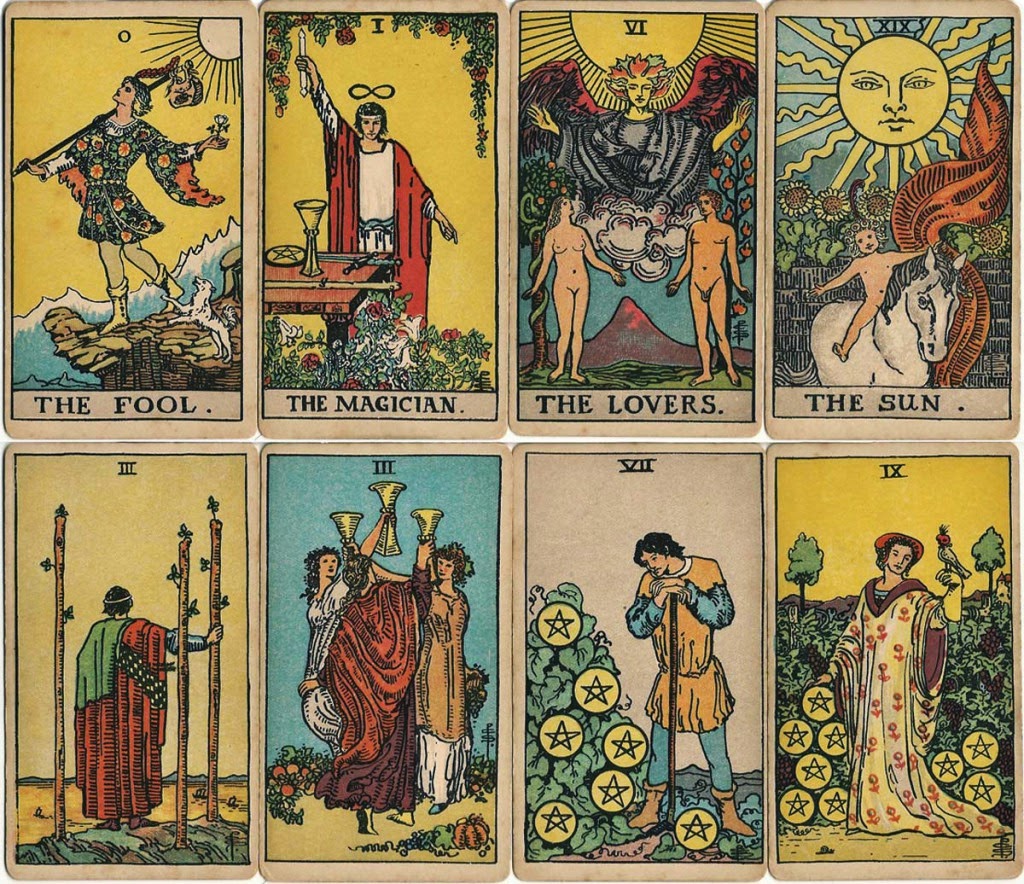 Hmmm. As a psychic, wasn’t she supposed to know if I’ve been in Africa? Plus if she doesn’t shake hands with people who might have been in Africa, what are the chances that she is not an idiot?

Her looks were the worst part, though. Where were her fringed shawls and long skirts?

She led me not through beaded curtains to a dim room with thick drapes and colorful rugs, but to a bright sunlit room. We sat facing each other across a white table sans embroidered table cloth, or crystal ball.

She looked into my eyes and said she didn’t accept credit cards.

Then she recited her price list. Twenty bucks for one palm reading three months into the future. $40.00 for both hands, going up to six months...

Wrong! Wrong! Everything about this was so wrong! But I said I’d start with the cheap one-hander.

She asked to see, but not touch, my right palm. Then she mumbled several truisms of the human condition like, You are often happy but have times when you are not.

It was completely disappointing which is not to imply that I wasn’t weeping. But when she told me I’d do well in medicine, or law, I suggested I ask specific questions. 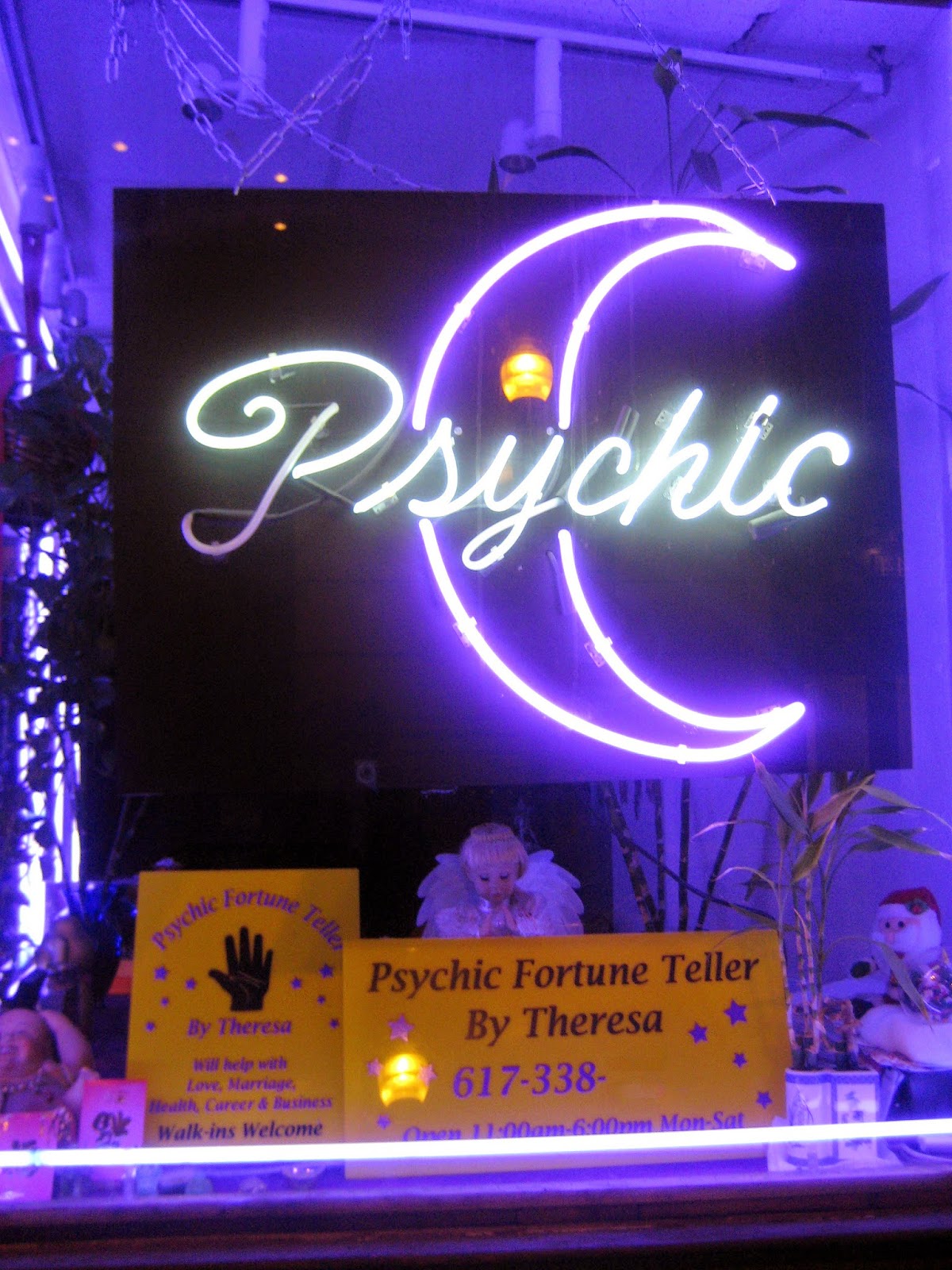 I reminded her that this was my first time and I didn’t know the rules. Then I told her I’d had a horrible year. My dad died and my mom is a mess. My career is dreck, I got fat, my car got totaled, and they’re building a mansion next door in what I’d always considered my empty lot... 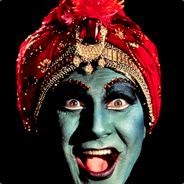 She had me put out both hands. She hovered hers above mine and said that after people die we are often sad and negative for a while.

With that wisdom ringing in my ears, I paid and left, still weeping.

After consuming many chocolate covered almonds, I goggled California Psychics. There were 306,000 results. One advertised $1.99 for the first ten minutes, although it was later revealed that those ten minutes were part of a twenty-five dollar commitment. Still, that was a bargain compared to the guy who charged $200.00 for thirty minutes.

Not that I think psychically gifted people should have to go mucking around in other peoples’ pasts or futures for free, but pay-pal seemed so... un-spiritual.

I played for a while on a free site that shuffled tarot cards like on-line solitaire but with life predictions.

And I left petulant phone messages everywhere until I finally got an appointment at a place in Silverlake. But when I got there the woman couldn’t keep our appointment because she was expecting a refrigerator.

I drove from there to a place in Eagle Rock because it was close. The sign in the window said, OPEN! But it was a lie.

My passion for the experiment/article was definitely fading. Had the entire psychic society of Los Angeles sensed my skepticism and decided to shun me?

But then I tried a shop in Los Feliz that was stocked with potions, candles, magic beans, and pictures on the wall of their staff of readers. I signed on and followed a friendly young woman into a tiny, rickety room painted deep yellow. We sat close, across a table with a colorful tablecloth and three sets of cards. This was more like it.

She took both my hands in hers and closed her eyes. Then she shuffled, I cut, and she dealt.

She was enthusiastic, encouraging and absolutely adorable. As she flipped over one card she gasped, “Oh I’m so glad you drew that one!” Another card inspired her to sigh, “I hoped that card would show up for you!” 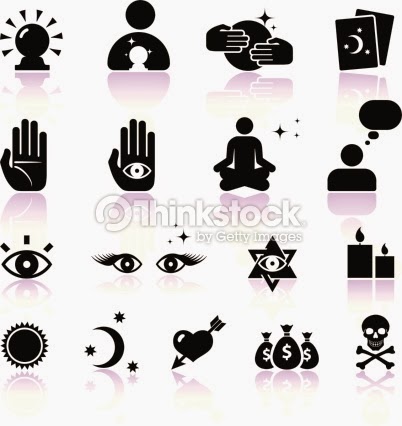 It was a great fifteen therapeutic minutes and I didn’t shed a tear. Who wouldn’t want to hear that their inner child was preparing to explode out to play and have a lot more fun? Or that there was a large circle of people eagerly waiting to embrace their work?

I suppose I could have gone on to meet more psychics as I’d proposed, but I felt satisfied and done. And ultimately, my adventure in the occult led me to accept as my fate that I’ll just have to let the future unfold as it will.

So, the piece will never appear in the paper but it’s here, for you.  Happy New Year, my friends.

As a writer, I'm fascinated with paranormal phenomena. As a citizen, I abhor the abuse of personal pain by psychics, mediums, etc...

But wait I see...the vision clears...yes, I see in your future an unpublished writer writing smarmy comments on your blog.

I love it! Hilarious! I would have loved to read your expose of the underbelly of the fortune teller racket...I mean, your heartfelt exploration of the meaningful ways in which psychics enhance our lives. But this blog entry will do nicely.