Tonight 36 people lined up too early for the Glendale Winter Homeless Shelter. They were less than a half hour early, but that was too early for the people in the surrounding businesses so they called the city and complained.

Whatever the caller(s) said worked so well that the person in charge of such things for the city insisted that the early birds be barred from entering the shelter tonight. No dinner. No bathroom. No cot. The city’s position was that spending the night on the street would teach the early arrivers never to be early again.

Never mind why they’d lined up early. After spending the day being shooed out of the parks if they fell asleep, shooed out of coffee houses for monopolizing tables, out of stores for lingering, out of doorways for looking untidy, who wouldn’t be eager to settle somewhere in peace?

But that pales in importance compared to the complaints of the callers.

The people who run the shelter said the punishment outweighed the crime. They begged for mercy for the 36 but were denied. The Book Ladies, (me an my daughter) thought the city was being gratuitously cruel; another case of the bullies tormenting the powerless. Even the Glendale police thought the plan was stupid and mean. 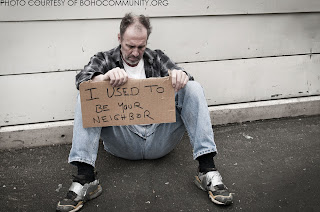 None the less 36 women and men were turned away tonight to wander the streets, while 36 dinners went uneaten and 36 cots stand empty.

Beyond the pale. If I were queen of the universe, I would fire those city workers and on top of that make them spend a week on the streets. This sickens me. I'm proud of you, Amy, and of your daughter, for your advocacy and for volunteering your time. Thank you.

How ironic we can spend money for police to remove the homeless but not use the funds to open the shelter half an hour earlier. Clearly these were the people who needed the shelter the most. Truly sad.

There are not enough words to express my outrage at this.