Dears, I banged out this piece the other night during a fit of insomnia/rage and sent it to my beloved editor at the paper, but I was too late to hit the Hef news wave. So, do I waste that fury or foist it off on you?
Here's foisting.
xoxo Amy
--------------------

I’m trying to make sense of why Hugh Hefner’s death is making me so mad. It’s certainly not because I wish he’d lived longer, or anything like that. It’s more like the anger I feel thinking of my friend’s dad who died young, but peacefully, with his loving wife at his side. His early death was considered tragic because no one knew he’d spent every Saturday morning raping his eldest daughter while his aforementioned loving wife and youngest daughter, went into town for piano lessons.

I hate that he got away with that in the same way that I hate that people are eulogizing Hefner as an icon of sexual liberation.
Hefner didn't invent porn and he didn’t rape me while my sister was at piano, but he, and his magazine had a profoundly creepy effect on a whole lot of us.
My story: I was a little girl, poking around in my big brother’s room, probably looking to swipe his Mad Magazine, when I discovered his secret Playboy, instead. I'd never seen one before. I don’t know how old I was, but I absolutely remember the shock.

Hey! That lady is nakey! And it's not like she was caught naked by accident, she's looking right at the camera!
And there were more pictures of her, and a note she'd written about herself.
Memory is a strange thing, and mine, at sixty three ain’t so hot, but I sure remember how deeply embarrassing that was. I was embarrassed for that girl, and for me. And gross! What about my brother? He looked at pictures of naked girls???
I bet he wasn’t supposed to have that magazine. It was for --- who? Grown-ups, probably.
Grown up men.
Wait.
Grown-up men like... my dad? And my grandfather? And my uncles and my parents' friends? The crossing guard? And neighbors?
Until that discovery in my brother’s closet, I believed that grown ups were there to protect girls. But here was a whole magazine of undressed, unprotected girls, smiling at strangers, telling them they liked evening strolls and ping-pong and(obviously) running around without their clothes!

I knew the basic facts of life by then, but believed that true love and romance played a major part in getting naked with someone. And that 'someone' wasn't random boys and men who bought a magazine. That 'someone' was Prince Charming!
I turned more pages. There was a whole assortment of creamy white, friendly-looking girls with no clothes on. They were called bunnies. But they weren't furry, more like skinned rabbits. And there were no boy bunnies.
There was a big sideways picture of the bunny of the month. The centerfold. So, I got it that month after month, men could sort through a whole new collection of girls for the bunnies they found most attractive. The choice was entirely theirs. The bunnies were so sweet and soft and good natured they just wanted to be looked at naked.
I wondered why.
Why did they want to be in that magazine with no clothes on? Why did they want boys like my stupid, pimply brother and his mouth-breathing friends to look at them? And what about hairy old cigar-smelling strangers? The whole idea was so bizarre and creepy!
And why did their parents let them do that? What if someone they knew saw their picture in there? Ew! What if their teachers saw? The ramifications were staggering and the world shifted. Grown-ups ceased to be grown-ups, at least as far as their unassailable roles as sensible protectors. From that moment in my brother's closet they became both sillier and scarier. For that moment of loss for me, and for every other little girl who experienced that harsh jolt over a Playboy, I hate Hugh Hefner.
And I resent that he got away with telling generations of boys that girls wanted them to look us over and judge us. I hate that the 'sexual revolution' he is credited with supporting, was just for boys while girls were as interchangeable and indistinct as...bunnies.

Maybe the girls I saw in my brother's Playboy still teeter around in their stilettos off screen at the Playboy mansion. But although Hefner aged, the bunnies flanking him in all the photos remain in their 20's. So, even if the decades of girls forgive him for using them as disposable, replaceable sources of income for himself, I do not. To me, he's just another sleazy old pimp who gets to rest in peace like my friends slimy dad. 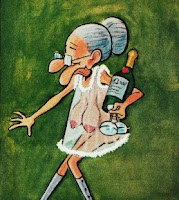 P.S. Re. illustration: Could anything be funnier than a old woman still interested in sex?

Yeah, Amy! You nailed it. I couldn't even read his obits, he and his life disgusted me. May he rest in a shallow grave that matches his shallow life.

I had a similar response to his death and ended up thinking less of those who displayed their regard for the creepy man.