Write What You Know: CANCER

When my daughter was 14 she was diagnosed with a blood cancer called Hodgkin's Lymphoma. Needless to say it was an unspeakably ghastly time, but beside a little lingering PTSD we all got through it. She’s 21 now, in college, worrying about other things.
But when we were still in the thick of it, my friend went looking for cancer books for my daughter and her friends. What she discovered was that when kids in books, movies and TV shows get cancer, they die.
I can’t blame writers or readers for loving a good tear-jerker, but if it’s your kid, your self, or your big sister who’s sick... well, you see my point.
And those story book sick / dying kids were invariably portrayed as saintly and angelic, more concerned with other people’s happiness than their own.  Peaceful, fearless, accepting of their fate.
This was not my impression. Mine was that snotty 14 year olds are snotty 14 year olds, sick, well, or on a Ferris wheel. The patients at Children’s Hospital Los Angeles were as bizarre and motley as any other huge group of kids.
And another thing I learned and re-learned and re-re-relearned going through the whole cancer nightmare, was that people inadvertently say and do incredibly insensitive and cruel things.
True no one knows what to do, and there is no one right thing to say besides, “OOPS! It’s all been a mistake! Your daughter is perfectly fine!”
So, once my daughter was in the clear, I set about writing a funny, teen, cancer survivor book based on her medical experience... Keeping these three things in mind,
1. Not all sick kids die. 2. Sick kids are no different than any other kids. In fact they ARE any other kids except they got sick. And 3. Sick kids, like the rest of us, are surrounded by idiots.
The truly horrific reality (finding out you’re sick, getting chemo and the side effects of chemo, hospital stays, trying to return to normal, school, well meaning friends and strangers...) makes for a scary enough story without having to kill anyone.
And I got to get back at all the stupid things people did by including them in the story! Pure spite and delicious revenge!
When the manuscript was done, I showed it to my daughter. She gave it her resounding approval and off it went.
SIDE EFFECTS was published in 2006, and the paperback followed a year or two later. The reviews were great and it still sells well... Although there have been complaints about the character's "language." 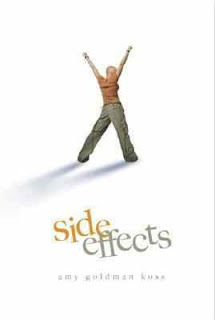 But the best part BY FAR are the fan letters.
I like all my fan letters. Even the e-mails saying they have an author report due on me in the morning and need answers quick.
But none compare to the letters I get from young people with cancer who thank me for writing a book that tells their story.
So that’s why I agree, at least this once, with the old saw about Writing what you know.
xo
Amy
Posted by Amy Goldman Koss at 7:35 PM

what would be cool is if you could put together a book of letters and responses. I would love to read it!

But who owns the letters? The one who sends or receives? And most of my letters come from minors... Unclear who can sign off on their writing?
That's why I don't even quote parts of their letters when I give talks. A conundrum.

that's what lawyers are for! someone who contacts every child and every legal guardian and gets their permission. of COURSE the publisher will pay for all that, right?

I love this book--it's tough and funny and powerful and true.

I was one of the tongue-tied idiots who knew not what to say when you told me of your daughter's condition. We ran into each other at Costco; and since I stutter anyway, being speechless just compounded the issue of 'what can I say in response?'

Flash forward many years, to June of 2008, when I was diagnosed with stomach/esophageal cancer. (Stage 4, as it turned out) I thought of that day in Costco as others tried to say the right things to me. Luckily, they all meant well. Many were eloquent, and fellow survivors were, well, honest and to the point. But all were initially gun-shy, looking for a sliver of an entrance way into this world of 'you have cancer and I don't.'

But I could see the fear in their eyes, hear the hesitancy in their speech as they struggled to say something, anything....

Flash forward another year and a half or so, and now I'm volunteering at the Cancer Support Community (once known as The Wellness Community) as a Greeter, the person that new cancer patients and caregivers see when they come in, seeking a support group. I talk to them, tell them my story, describe the support groups, and you know what? I still don't know what to say. I yearn to be moving and profound; rather, I usually make someone cry. They thank me afterward, but I never feel adequate in the 'right thing' department.

I am, however, a little better at it now. And I'm really good at keeping secrets; several friends have cancer or have been through treatments and they want absolutely no one else to know. I was so out there, telling everyone, friends, bosses, co-workers...for some reason the most vocal of cancer patients can also be the most discreet about another's diagnosis.

I need to get and read your book, of course. The good news is that your daughter is thinking of other things. May she never have to confront cancer again.

That goes for the rest of us, too.
There. That's the right thing.

Aw Craig, what a sweet letter! I don't remember that day in Costco and I'm sorry it has since given you pangs! I too was an out there, tell everyone, demystify --de-stigma-fy (?) cancer. Thanks for your note. I bet you're a wonderful greeter! XXOO

I came to your blog via a tweet by A.S. King. SIDE EFFECTS sounds like a good book and I'll be keeping an eye out for it. For another YA/MG book where a kid gets cancer but doesn't (as far as we know) die, you might want to check out Gary Schmidt's OKAY FOR NOW. The cancer isn't What it's About, but if you're in a position to recommend books to someone in the same position you were once in--especially maybe for a slightly younger reader--then this might be a decent one.

Great post about a great book. And the cover floors me every time I see it. It rocks!

I have no idea how I missed this book. I'm glad you blogged about it--I'll be reading it soon. (And so glad your daughter's on the other side of this...)

We all love Side Effects and recommend it to our friends.
Thanks Craig, Liked hearing from you. Go all survivors and all funny writers!