I am here to report that this is a big country and not all lives are identical!  This I know to be true having recently had three (3) illuminating Out-Of-House-Adventures!
The 1st was a school visit to a tiny town in southern Illinois which, recently went from being a poor mining town to being an even poorer ex-mining town.
I visited their cemetery and ate at 3 of their (I think) three restaurants. One being Dairy Queen.
Most of the town consisted of small homes, grassy fields, major woodsy parts with spectacular fall colors, foolishly fearless deer, horses, cows, and a sprawling K-8 school of enthusiastic, mostly blond, white kids whose principal looked like Southern Barbie.

When the school first called to arrange my visit and ask about ordering my books, I suggested they contact their local independent bookstore. HA! HA! HA! Now I know that the closest "bookstore" was the Walmart a few towns over.
It must be fun to be a kid there though, tearing around on bikes, tipping cows, racing the train to the unfenced crossing, cooking meth or whatever.
But what do the grown-ups do?
My Los Angeles-ness practically broke out in boils. It made me wonder how my books read to kids whose surroundings and experiences are so different from those of my characters. Unlike the kids in my books, when these kids skip school they don't take the subway to China Town for din-sum, or sneak into office buildings and ride elevators to the fifty-eighth floors just to make their ears pop. That would be hard to do in a town with exactly zero (0) buildings over three stories high.
I'd puzzled over this sort of thing before when my books were translated for sale to kids in foreign lands, but I'd never considered how exotic they could seem in my very own language and country.
Stop #2 was a red brick Catholic middle school for at risk girls in urban St. Louis, Missouri. There I addressed the entire student body (72 mostly African American, uniformed, excessively polite but involved and curious girls) in one smallish room.
These girls get to school early and stay until 6:00PM year round. They even have class one Saturday a month, unlike the girls in some of my books who are nannied about from piano to dance lessons, to pool parties at each other's houses, and spend a lot of time lolling around bored.
I was asked (by a plain-clothes-nun, which I think is sneaky right there) why I choose to use foul language in some of my books.
My auto-reply to this question (and you are free to use it if you are potty-mouthed) is not, “Who gives a shit?" But the smarmier: “As a writer, I love ALL words, just like I love all the characters in my books, including the mean nasty ones.”
The 3rd phase of the Amy-Out-Of-House-athon was spent wandering a mostly deserted suburban mall with (according to their website) 215 stores & 45 restaurants. I don't know if that includes the kiosks.
There I discovered a preponderance of sparkly things for sale, not just for little girls, but for grown woman as well. And not elegant, 1930s evening ware from the black & white movies type glitter, but hysterically screaming, super flashy, giddy, giggly, clothes, shiny bags, belts, hats, wallets, sequined hair sparklies, twinkly make-up, girly outfits for phones and steering wheels, and pink feathered princess stilettos like those once offered exclusively at Fredrick’s of Hollywood.
What a blinding species we became while I wasn’t looking!
It occurs to me now that the greatest fun would be to mix it all up and as my pal KT says, "Blow the stink off!"
xo
Amy 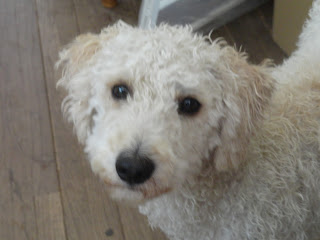 P.S. Apropos of nothing, here's a picture of Wally Dog.

Very interesting, Amy. I grew up in sort-of-southern Illinois, just across the Mississippi River from St. Louis and I recognize both places. I never tipped a cow, but I rode my bike constantly, everywhere, and felt a freedom I don't think many kids feel today. For these girls your books probably read as high-fantasy!

I wish I could have gone on that tour to see those different schools. Are low-income, working-class families underrepresented in YA and MG fiction? Then again, who buys the books?
Sincerely,
Lupe F.

Great blog, Amy. The Midwest is like some whole other country to us urban folks. I love driving through it, and it's been interesting to have my son at college in Tennessee. I would like to hear more about your time with the girls in Illinois and in St. Louis. Perhaps a novel will develop??

I feel like I was right there with you, girl. Beautiful blog!
xx,
Sonya

Ha! excellent entry, love the way you tied them together at the end. It speaks to the age-old dilemma librarians face, wanting to have books that speak to where our teens live and what they experience, but also trying to get them to read about people who are very unlike them.

And Wally Dog is too darn cute!!

Wow!
Ok I have been in all those towns and I applaud your descriptions. I have never bought a book to read about myself and my life. I want to know other peoples lives. I suspect there are a lot of me types out there.
Sue B

Amy, great post. We urban/suburbanites typically forget the rest of the world and think everywhere is just like where we are. We are so wrong. It must be so rewarding to address all of these students and tell them your stories. I'm sure these visits will somehow emerge in your wonderful writing.