My daughter Em just reminded me that nine years ago today she was diagnosed with cancer. She was 14 at the time. Wow, what a long/short time ago. Since that time how many thousands of mothers have gotten that news -- Have bundled their children off to the hospital trying to find the right words to explain it to them -- Have not let themselves think even a day ahead, refusing to entertain possible outcomes?

Here's what I remember about that day:

The odd look on our pediatrician's face when she felt Em's swollen glands.
The Dr. on the phone saying it was Hodgkins Lymphoma, and telling me to take Em to Children's Hospital where they had a bed waiting.
I remember not being able to get off the kitchen floor, phone still in hand. The word "floored" thus defined. 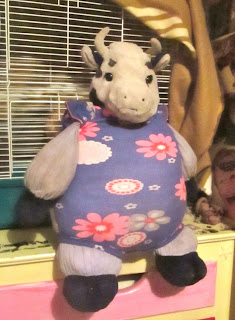 I strapped Diana into the van beside me. Diana is the sacred purple cow Em has slept with every night since she was two, and now has tattooed between her breasts.  I don't remember packing anything else. I got Em out of class and probably babbled some explanation, but it was the sight of Diana that told her it serious.

And then there's a blank.
Well, not a total blank, but a blankish thing that stands in for the memory/denial/confusion/terror/functioning/survival/panic that followed.
I must have called my friend Sue and told her to meet us at the hospital because she was there when Em, Diana and I walked in. She'd brought Em a Spirograph.

Husband Mitch was out of town, far away and useless to me.
My father-in-law and his new wife were visiting and probably waiting for dinner.
My son needed to be picked up from school. Someone had to tell my parents and Mitch's mom in Michigan. I must have called my brother and told him to break the news. 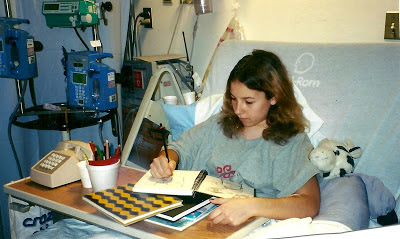 Em needed a biopsy immediately, but she was afraid of shots.
They gave her la-la drugs and put a surgical gown on Diana.
A nurse called me "Mom" and hugged me as they wheeled Em away.
The morphine made Em heave.
But it was nothing compared to the heaves to come. She got her first chemo that very night from a tall nurse in a blue rubber gown who referred to herself as a Smurf. It took many stabs to find Em's veins. 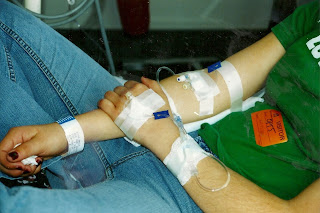 My sister-in-law Susan flew in from Michigan and brought little airplane bottles of Baileys. She and Sue listened and talked to the doctors for us as a tag-team.

I slept on a slippery chair-bed beside Em's bed. The nurses shoes squeaked in the hall. We were led and wheeled down halls, up elevators, into waiting rooms for bizarre tests and sci-fy scans. We got the giggles.

It was impossible to take a full breath.

Em's best friend Allison climbed into Em's hospital bed and refused to leave. Em's other best friend's father wouldn't let her visit because she was freaking out so badly.

Someone brought us a huge basket of trail-mix and snacks and I fed out of it like a horse at a trough.

Mitchell returned. He took our son Ben to the batting cage and told him to pretend the balls were his sister's tumors.

One roommate left and another took her place. We were embarrassed that neither had visitors.

We were eventually released. Allison pushed Em and Diana in a wheel chair to the exit.  Em wore a striped paper surgical mask to keep germs out, her lap piled high with flowers and gifts. Mitch brought the car around to the curb in the parking lot. Our first breath outside the hospital in how long? Three nights, five? A week? Separating all life into Before Cancer and After Cancer forever more.

Nine years is a long time. A wonderfully long time. It is lovely to forget.

I teared up reading about it and I have read and loved Side Effects. This is my favorite kind of Aniversary. I love it when a terrible thing becomes only a memory.
Blessings to you all.
Susan

Wow. How scary. Thank God there was a happy ending.

So the wonderful feeling of authenticity in Side Effects wasn't just from diligent research, eh.

Amy, while I knew the story, reading it here still gets me choked up. I'm so glad all of you got through that time and that Emily is healthy today. xoxo

Powerful. As powerful as Side Effects when I read that. Instead of the usually quick shout from the hallway, I will be giving my two daughters hugs this morning when I wake them.

Thank you for sharing your story...it's easy to forget that people are suffering all around us. It's good to be thankful for our own health and to think of and pray for those who aren't as lucky. Here's to many more cancer-free years.

Thank you for sharing such a painful memory. Yay for the happy ending! Have two friends going through cancer battle right now, one near the end, so I really needed to hear about a happy ending...

I'm teared up in cvs. Hurray for the happy ending. and now, i have to read side effects!

I'm teared up in cvs. Hurray for the happy ending. And now i have to read side effects!

Amy, this made me cry. In a good way. All hail Diana!