The guy in charge of book sales for our library agreed to let me load my car with books to give away at the homeless shelter.  He led me through secret underground passageways to the loading dock and pointed out the shelves, carts & boxes I was free to pick through.

A real librarian probably would have stood before the scrambled collection of donated books and plucked with certainty, selecting just the right mix of mysteries, histories, memoirs, poetry, horror, humor, romance...

But the only book I felt confident skipping was the one on perfecting your golf swing. Although even then I was afraid the first question I’d be asked as I unpacked the books at the shelter would be, “Have you got anything on golf?”

I went last winter to help serve dinner to the homeless, which ended up feeling pointless and stupid, since they were perfectly capable of serving themselves. But now I knew where the armory was, and what the space was like so I was able to imagine myself there. I'd be Jolly Ms. Santa, surrounded by adults and eager children happily selecting books of their own, to carry off to read after they finished their homework. But it turned out the shelter isn’t open to families with kids this year, so my fantasy, and book selection required adjustment. 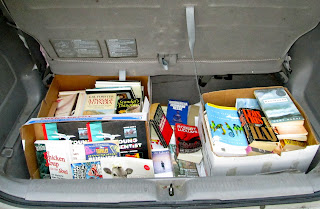 ***
People were standing around outside the closed door when I arrived, which meant the shelter had reached its eighty person capacity and was turning people away.

The outsiders told me they hoped some people would be kicked out, freeing up a few beds, enforcing the strict anti-stoned and drunk rules.

It was a mild night, clear skies, with Jupiter right up next to the moon. But still, it had to be an enormous drag to be left outside, watching everyone else get their blankets, cots, and dinner, through the big glass doors.

The guy who let me in explained that the over-flow guests would be taken to Sylmar, where there were still beds. Sylmar was 20 or thirty minutes away.

The folks inside were eating dinner so I unpacked my rolling suitcase of books and arranged them on a table. People trickled over and several books found homes before the guy in charge even made the announcement that I was there. Many people asked how much I was selling the books for, and when I assured them they were free, they seemed surprised which in turn surprised me. Who would try to sell things to the homeless?

One woman took a whole arm full of books. With the opposite impulse, a man eyed a fat, hard-cover collection of Hemingway stories, but ultimately told me he was reluctant to take it because he was trying to travel light. (Note to self: bring more paperbacks.) One woman said she didn’t have reading glasses, which introduced  a whole new nightmare: Homeless and glasses-less?

There was a book by S.E. Hinton on the table and it sparked a conversation with a woman whose favorite book as a kid was The Outsiders, which I’d loved, too.

One guy picked a book that had been signed by the author. It was no one he or I had ever heard of, but he was jazzed by the thought that it could be valuable. I didn't tell him that I was an author, and that most of our signatures weren’t worth squat.

I had to keep telling people the books were from the library but I was not a real librarian. I felt like an impostor, but no one seemed to care. Everyone who came up to my table was sweet, every one thanked me, and no one asked for books about golf.

When we were down to Frank McCourt's Angela's Ashes and a beautifully illustrated (but heavy) bird book, I told a few guests that I’d be back with more books next Tuesday. Some said, “Good.” Others said they hoped to be long gone by then. I hope they are, too.

Meanwhile, it’s nice to think of those people lost in a book tonight, on their cots, instead of just staring up at the high, industrial-looking armory ceiling.

When I left, there were no more stragglers outside, so I guess they’d been shuttled off to Sylmar. I hope there was still some dinner left for them there.

P.S. Returned last night for my second Tuesday, brought reading glasses but the glassesless woman (along with most others from the first night) wasn't there. Will see over the remaining winter Tuesdays how much the faces change. People just as sweet and grateful this time. Sixty books gone in a blink!
Posted by Amy Goldman Koss at 5:15 PM

What a wonderful thing to do, Amy. I'm still waiting to hear from the ladies whe heard speak at Once Upon a time. I am glad they got books.

I am crowning you as Honorary Librarian, Amy.

Thank you for sharing. What a blessing.

Thank you for sharing. What a blessing.

You're doing a real mitzvah, Amy. You'll probably be made a real librarian in heaven!

OMG, Amy...
"One woman said she didn’t have reading glasses, which introduced a whole new nightmare: Homeless and glasses-less?"

I couldn't even imagine.

Thank you for this post. I felt as if I were there with you. You should be a writer.

I've read a few of your posts now Amy. I like your style, interesting and professional. Keep it up.