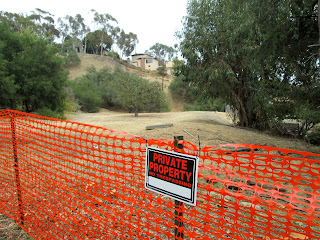 The empty lot behind my house, where my kids flew on a rope swing and tobogganed on cardboard down the dirt hillside,
Where Sweetie-the-dog went from pup to old lady to memory,
Where the avocados drop from the tree and the pomegranate grow for free...

Where we picnicked on the flattened grass where deer had slept the night before.

And where I once found the perfect skeleton of a young coyote who'd died curled up, as if asleep with his head on his paws.
And the leg bone of a deer, who’d died much less peacefully.

The empty lot that we referred to as “the lemon store” in season,
Has just been sold and scrubbed of all life, and fenced off.
I don’t know who bought it or what they plan to build there.

I’d always meant to take one photo of it a month for a year to make a calendar, to show the folks back home in Michigan who think we don’t have seasons here.
The empty lot went from a field of tender baby grass,
to a mass of yellow flowers,
to towering weeds that a pup could get lost in,
to a crisp tangle of burrs and dried seed pods.
The perfect southern California field.

And my house was probably once someone's empty lot.

Perhaps some day, I’ll be able to see it as a beginning.
Maybe marvelous new friends will move in.
Maybe the new place will have magic ponies, or... or...

But right now, I can’t imagine any replacement being an improvement over the birds, and butterflies and wild flowers and bunnies and deer and silence -- The full emptiness of our empty lot.

I wish I could write like you. I am so sorry you lost your lot. I hate the loom of civilization when it's anywhere near me. This must be how farmers felt when their field were sold for subdivisions.

Alas poor empty lot,
you knew it well.
For a developers spot,
the space will become a parking lot.
Sincerely,
Cardboard Fort

Awww.... beautiful, Amy. I wish you'd done the calendar, too.

I'm so sorry to read this. You wrote so eloquently about that special place.

At the corner of our street WAS a glorious Royal Poinciana tree. Neighbors would stop to chat in its shade, dogs would rest during long walks, etc. It even survived a hurricane and eventually bloomed to its former self.

Only to be chopped down in pieces by a land developer. The empty lot that took its place and now half-finished house make me sad every time I walk past -- which is daily.

I understand your pain and I too hope something beautiful comes of that space again.