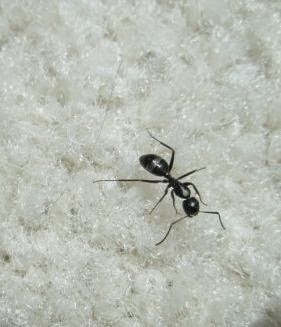 Back home in California I never saw a lone ant.

Sometimes I'd unsettle a swarm in the garden and they'd spill like liquid in all directions. They occasionally made their long jagged march across my kitchen wall or descended like a brown fog on the dog food. But here in Michigan, at my parent's house, there seems to be one lone ant; a big, waxy-looking black one.

I noticed him for the first time a few weeks ago, struggling across the pile of the beige living room carpet. It seemed a dry and miserable trip so I scooped him up and rushed him out the door. But when I opened my hand, he was gone. I assumed I'd dropped him along the way and I didn't think about him again until I was sitting on the toilet a few days later and saw him hurrying across the white bathroom counter. He circumnavigated the sink then headed across the rough wall paper toward the towel rack.

His mission was a mystery to me, but his pace was clearly that of someone with a plan. Other than stopping briefly to rub his abdomen, and another time to rear up on his tiny hind legs to take the long view, he moved with the same certainty on his circuitous return trip to the sink.

I didn't grow up in this house, I've only known it as a guest. But this is where I've brought my children every summer of their lives, it is where they grew up and my parents grew old.

Since that day in the bathroom watching the ant, I've been distracted by things like my dad's four day stint in the cardiac care unit with swollen purple feet and Sun Downer's syndrome, and the near-impossible search for non-smarmy, bullshit-less advice for my mom's Parkinson's and vision problems.

But now, I just saw the ant again on that small nude sculpture in the den. We'd been discussing the possibility that the den furniture might fit in their new assisted living apartment. We haven't yet received the exact dimensions of their room. We hope it will accommodate the big brown chair, the coffee table and both small green couches, although we all secretly suspect that just one couch will fit, and even that will be a squeeze.

A moment later, the ant was hurrying across the brick of the hearth. Next, he veered off toward the blinds across the sliding glass door.

I wonder if that ant has been at his thorough exploration every moment between the times I'd noticed him. The den is a long way from the bathroom. Was it a four day hospital stay away in ant distance? Had he covered every room between the two with equal energy and focus? Does that make him better prepared for moving day than the rest of us are?

When I think back to these goodbyes, will I remember the deep, dry pile of the beige carpet? The smoothness of the bathroom counter? The coolness of the small white marble sculpture? The black waxy ant? My parents as they once were?

Amy, a lovely post. Such an important task for such a little insect, providing memory markers. We try so hard to hang on to big memories of note, but sometimes it the recollection of the deep, dry pile of the beige carpet that will lead us on a long and wondrous remembrance.

Ant colonies send out one ant as a scout. Somehow, he lets the other ants know when he's found what they want - usually water. Perhaps the ant has something to tell you, too. Perhaps he has scouted and decided: there is nothing there here any more and it's time, yes time, to move on. Thinking of you and hoping the ant can point you all in the right direction.

Amy, you're such a great writer. I love your observations, and the nuanced tone of this.

I want to say something clever or profound, but you have hit too close to home. Once again, you have written a beautiful piece about a distinctly unbeautiful phase of life. xo

In a few years, you may remember your parents as they once were. Beautiful poignant post. It's odd the things our brains retain in moments of stress.Thank you.